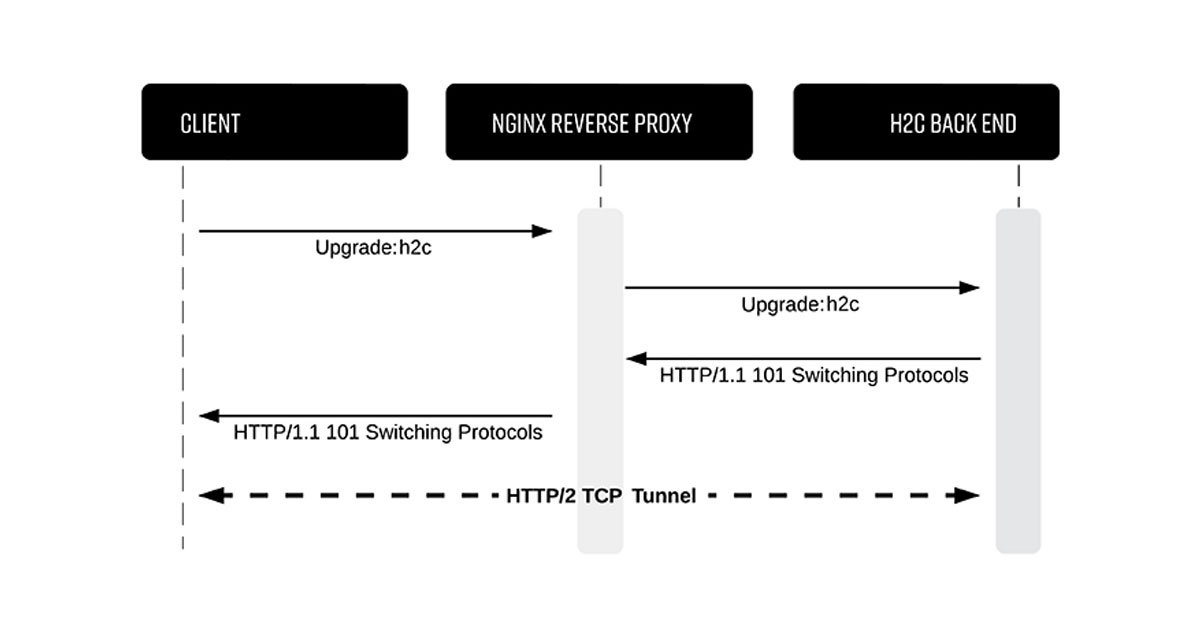 The revival of HTTP request smuggling has led to devastating vulnerabilities in our modern application deployments. An HTTP request smuggled past the validation of an edge server can lead to serious consequences, including forged internal headers, access to internal management endpoints, and a variety of opportunities for privilege escalation.

HTTP/2 (or HTTP/3) is a promising solution to the issues we’ve faced with request smuggling, but support for HTTP/1.1 isn’t going away anytime soon. In the meantime, we’re still in for more surprises from our good friend HTTP/1.1.

In this post, I demonstrate how upgrading HTTP/1.1 connections to lesser-known HTTP/2 over cleartext (h2c) connections can allow a bypass of reverse proxy access controls, and lead to long-lived, unrestricted HTTP traffic directly to back-end servers.

To understand this vulnerability, let’s review the behavior of the HTTP/1.1 upgrades and how upgrades are implemented by proxies.

The Upgrade header is most often used to upgrade HTTP connections to long-lived WebSocket connections. Proxies support this behavior by keeping the original client connection alive and simply proxying the TCP traffic to the back-end server. At this point, the proxy is no longer content-aware and can no longer enforce access control rules.

Let’s examine the h2c upgrade process. It begins with the client initiating an HTTP/1.1 upgrade request. Once a successful 101 “Switching Protocols” response is received, the client reuses the connection and transmits data in accordance with the newly negotiated protocol, in this case h2c. The diagram below illustrates this behavior:

After receiving the 101 response from the back-end web server, the proxy maintains a persistent TCP connection and no longer monitors the content. To quote the NGINX WebSocket documentation:

“A WebSocket application keeps a long‑running connection open between the client and the server, facilitating the development of real‑time applications. […] NGINX supports WebSocket by allowing a tunnel to be set up between a client and a backend server.

Although this form of request smuggling does not lead to socket poisoning (also known as HTTP desync) attacks, it can still allow you to bypass significant edge-server access controls. It is an excellent addition to your bag of tricks when testing services with WebSocket support.

But what if we didn’t have to trick the back end and could just maintain an HTTP-based TCP tunnel by design? Here’s where h2c upgrades come into play. I decided to investigate the behavior of h2c implementations to see if I could find a more flexible option for smuggling.

THE H2C SPECIFICATION AND A RISKY OPPORTUNITY

Typically, usage of the HTTP/2 protocol is negotiated over the TLS application-layer protocol negation extension (TLS-ALPN), where it is identified by the string "h2." This happens before we send our first HTTP request.

However, HTTP/2 can also be initiated via an HTTP/1.1 Upgrade header, identified by the string "h2c" for cleartext communication. Here is an example request:

The hop-by-hop header HTTP2-Settings contains Base64 encoded HTTP/2 connection parameters. According to the specification, h2c upgrades are allowed only on cleartext connections and the HTTP2-Settings header should not be forwarded (RFC 7540 Section 3.2.1).

Reading the specification led me to three questions:

cURL and other HTTP/2 clients won’t let you perform an h2c upgrade over TLS because it is a violation of the specification. So, using the hyper-2 HTTP2 library, I created a custom client to test.

I configured an NGINX server with TLS termination on port 443 with a WebSocket-like proxy_pass on the / endpoint to a back-end service supporting h2c upgrades. I also configured the NGINX server with an access control that blocked all requests to the /flag endpoint, as shown in the configuration below:

For the back-end server, I created a simple Golang server that supported h2c upgrades:

Directly sending requests to the proxy for the / endpoint succeeded and the /flag endpoint failed, as expected:

This behavior is shown in the diagram below:

Now using my custom client, h2cSmuggler, to initiate an upgrade over TLS, we are able to successfully access the restricted endpoint (-x specifies the proxy):

This behavior is shown in the diagram below:

Let’s break down what just happened:

As shown above, we successfully bypassed the proxy’s access controls to access the private endpoint! (Try out the tool and Docker demos here.)

Per the specification, proxies will always expect h2 protocol negotiation to occur through TLS-ALPN. So, we can instead initiate h2c connections via HTTP/1.1 over TLS using h2cSmuggler.

We can also perform this attack over some cleartext channels. As long as the proxy does not support h2c upgrades and simply forwards the client’s h2c upgrade request to the back end, this attack will likely succeed on non-encrypted channels as well.

Through a separate experiment, I confirmed that in the event of multiple layers of proxies, this technique still works. Assuming all of the proxies successfully pass the necessary headers, you can perform the original attack and it will pass your data along the series of intermediary TCP tunnels created by each respective proxy.

With this type of request smuggling (“tunnel smuggling”?), you can send as many requests as you like via HTTP/2 multiplexing. Also, as we know from prior research, HTTP request smuggling enables a wide variety of attacks, including: forging internal headers, accessing restricted administrative endpoints, and sometimes Host header SSRF allowing further movement through the network.

But I know what you’re thinking: "That NGINX config seems too specific. When is that going to happen?"

Here are insecure HAProxy, Traefik, and Nuster configurations (about as generic and innocuous as you can get) that forward the required h2c headers by default:

Note: Traefik doesn’t include HTTP-2-Settings on the proxied Connection string, which may cause the attack to fail on some h2c implementations.

What about back-end servers supporting h2c?

Because of its ability to reduce bandwidth, h2c makes a strong candidate for low-latency intra-network (i.e., microservice) communication, and avoids the management and (contested but often cited) performance overhead of TLS.

As such, popular web frameworks often support a configuration option to enable h2c upgrade support. That said, support is rarely an out-of-the-box default.

Assuming an insecure front-end proxy configuration, h2c usage in microservices may increase the likelihood of a successful attack.

To mitigate the risks of h2c smuggling on proxy servers:

Which services are (and are not) affected by default?

For h2c smuggling to succeed, the Upgrade header (and sometimes the Connection header) needs to be successfully forwarded from the edge server to a back-end server that supports h2c upgrades. This configuration can occur on any reverse proxy, WAF, or load balancer.

If only WebSocket upgrades should be allowed:

If no upgrades should be allowed:

This middleware configuration will replace or remove Upgrade headers as they appear in incoming requests:

OUR FINDINGS FROM TESTING ON COSMOS (FORMERLY CAST)

Here are lessons we learned when we attempted to identify instances of h2c smuggling across a large set of hosts:

Here are some exploitation tips:

In many ways, arbitrary user-controlled requests through request smuggling or request forgery attacks have become the “hijacking the instruction pointer” of modern, RPC-driven microservice architectures. Maintaining defense-in-depth strategies, reducing the significance of smuggled headers in your architecture, and being prepared to identify and reject suspicious requests on the back end will help reduce the impact of future attack techniques.

Check out the tool and demos here: https://github.com/BishopFox/h2csmuggler

Thank you to @0ang3el for his fantastic research on WebSocket request smuggling, and to @regilero and @albinowax for their inspiring and terrifying work on HTTP smuggling vulnerabilities.