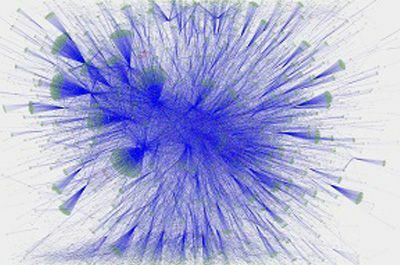 This blog post was authored by Senior Security Analyst Zach Julian; you can connect with him on Twitter here.

In the first week of 2017, Iranian ISP Telecommunication Infrastructure Company (TIC) performed a BGP hijack affecting 99.192.226.0/24. Their goal was to censor select websites residing on the /24 block from Iranian internet users. However, the BGP hijack leaked on to the greater internet, resulting in the IP range becoming inaccessible to users outside of Iran, including from India, Russia, Indonesia, and Hong Kong [1].

In this blog post, I’ll show how the attack began, propagated, and was finally countered. Readers unfamiliar with BGP hijacking should refer to “An Overview of BGP Hijacking."

We can analyze this event using RIPE NCC’s BGPlay, a tool for visualizing BGP routing information.

Start and Spread of the Attack

Omantel AS8529 then advertised the malicious route to its peers, resulting in the bogus route affecting more and more of the Internet. The screenshot below shows additional malicious routes announced to other Autonomous Systems a short time later.

Figure III - During the BGP Hijack

The below animation shows new malicious routes being propagated:

How the Attack Was Stopped

The attack continued until about 16:00 UTC on Friday, January 6th, when two steps were taken to end the hijacking. First, the legitimate AS27589 began making an announcement for 99.192.226.0/24. A static route was configured between AS27589 (MojoHost) and AS25152 (RIPE NCC), which the DNS K-root server belongs to. The new route can be seen below:

Figure 6 - BGP Paths Adjusting to the Legitimate AS

This incident is another example of BGP’s technical limitations being exploited to restrict internet access. It’s also a unique instance of one country’s laws spilling outside their jurisdiction.