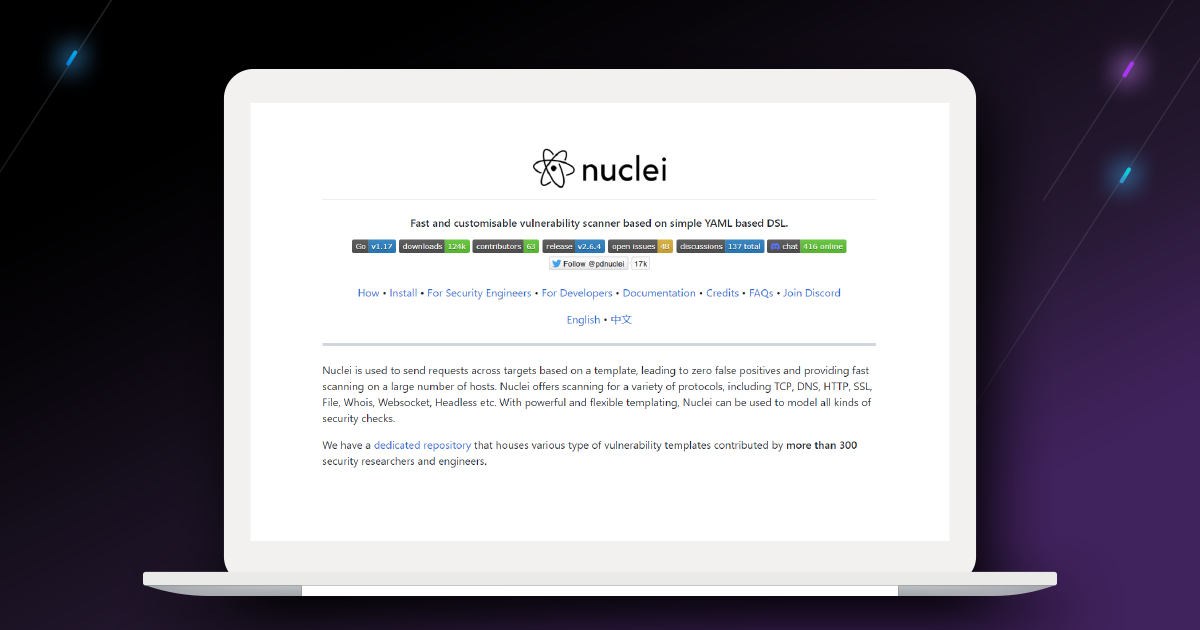 Here at Bishop Fox, we love using open-source tools to outfox attackers and protect our customers’ attack surfaces. Nuclei is one of our favorite tools to run more speedy, efficient, customized, AND accurate multi-protocol vulnerability scanning. As our customers’ security architecture inevitably changes over time and attack surfaces broaden, Nuclei templates provide a single source of truth to help reduce the noise and focus on the vulnerabilities at hand. We’ve briefly spotlighted the tool on our blog previously and recently hosted a Tool Talk webcast with Sandeep Singh, Co-Founder and CTO of ProjectDiscovery.io, to take a deep dive into how the tool works and how our experts use it at Bishop Fox.

“What’s clear today is that we need to operate with a renewed sense of urgency since we’re covering an ever-expanding attack surface.” - Joe Sechman, AVP of R&D, Bishop Fox

The Low Down on Nuclei

Nuclei is an open-source tool that enables fast and customizable vulnerability scans based on simple YAML and DSL. Using templates that can scan protocols including TCP, SSH, DNS, HTTP, SSL and many more, Nuclei sends requests across targets to provide quick and large-scale vulnerability scanning. Over 300 security researchers and engineers, including some from Bishop Fox, have contributed to a dedicated vulnerability template archive that serves as a community-built resource.

“Since security and automation were common interests for all of us, we decided to work on all the ideas we had, including Nuclei, and that’s how everything got started.” -Sandeep Singh, Co-Founder & CTO, ProjectDiscovery

When teams across Bishop Fox conduct vulnerability scans on our customers’ attack surfaces, speed, accuracy, customization, and efficiency are critical to identify cracks before attackers even know they exist.

We talked with Foxes from our Network Security, Managed Services, and Cosmos teams about the ways they use Nuclei, and here is what they had to say:

Not only does Nuclei allow Bishop Fox to speak the same vulnerability language internally, but we can better communicate across the greater community. Sharing our attack surface templates with other Nuclei users and garnering feedback adds additional knowledge layers to our teams, leading to more rapid testing and remediation.

“We can build each other's understanding of vulnerabilities really quickly because we have the ability to communicate in the same language.” - Zach Zeitlin, Senior Operator, Bishop Fox

With so many things in the world migrating to web applications, HTTP is a common protocol across attack surfaces. However, there are many cases where practitioners need to scan for vulnerabilities on non-HTTP protocols. Nuclei’s highly adaptable template engine combined with community crowdsourcing gives our offensive experts more time to hack and less time to toggle between tools in search of solutions.

Here are a few ways that Bishop Fox leverages Nuclei’s versatility and flexibility:

“It was really cool to see how fast we were able to apply updates as we discovered different avenues of attack, and that was all made possible by Nuclei’s flexibility of templates.” - Zach Zeitlin, Senior Operator, Bishop Fox

Nuclei templates give our Cosmos operators the flexibility to craft raw data, send it to a TCP endpoint and then parse the response, which is a limitation in many other platforms. Using Nuclei, we can test against both well-documented and undocumented services listening on any port. With modular templates tailored for generic TCP sockets, the door is open for crafting proofs of concept against reverse-engineered protocols lacking documentation.

Nuclei templates also support credential re-use testing. When we have a database of client infrastructure, we can query all endpoints of a specific protocol, like SFTP, and then use a template to test found credentials against the endpoint. This works with many authentication services. No more scripting for one-time use!

Our Cosmos team often utilizes tools that validate exposed API tokens when investigations lead to exposed repositories containing a list of API tokens, for example. In one such instance, some tokens were easily paired with a publicly known API, while other tokens appeared to be generic. Nuclei allowed quick validity testing for those tokens against numerous API endpoints using the token-spray templates, increasing our speed and efficiency of testing exposed credentials and tokens for our customers.

Lastly, a Bishop Fox team came across a 2018 CVE using SSH protocol that allowed enumeration of usernames in an external pen test. After an initial run of a different tool that didn’t provide a solution, Nuclei solved the problem with an existing template. The ease and flexibility of Nuclei templates ensured that vulnerability scanning could be performed on SSH protocol. This discovery led to further testing and remediation of this outdated CVE in the customer’s network.

“The discovery was certainly a core finding that we needed to let our customers know about, and I wouldn’t have found it if I didn’t have this one particular template for SSH.” - Matt Thoreson, Senior Security Consultant

The Future of Nuclei

For security experts, especially those working with expansive attack surfaces, it is cumbersome when many tools are needed to get results for one task, not to mention the risk of errors and false positives. We learned straight from the source, Co-Founder & CTO Sandeep Singh, that the Nuclei templates are intended to help security practitioners by providing a common platform, eliminating the need to switch between tools to perform multi-protocol vulnerability scanning.

As web application integration expands at lightning speed, tools like Nuclei will be afforded huge opportunities to support security practitioners that need logical, accurate, and efficient multi-protocol vulnerability scanning results. The core building blocks of community input combined with universal communication will provide a reliable open-source place of truth as Nuclei grows. Nuclei is off to a great start supporting the offensive security community, and we look forward to what the future holds with this impactful open-source tool!