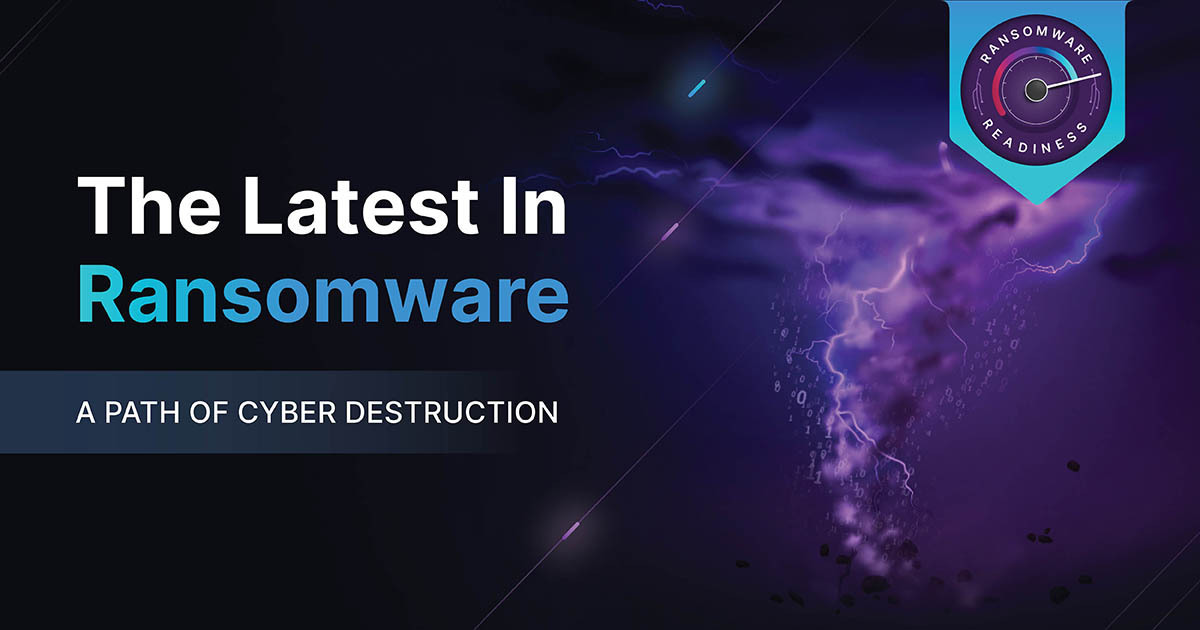 As the curtains start to close on 2022, ransomware attacks have left a path of cyber destruction indiscriminately targeting victims across a variety of industries, organizational sizes, and geographies. Governments big and small recognize the pernicious nature of ransomware and have begun taking steps to disrupt operations, but this daily threat continues to plague organizations of all shapes and sizes on a global scale.

The rapid evolution of ransomware-as-as-service (RaaS) means that increasingly greater numbers of criminals can deploy malware for ransom payments and extortion campaigns. And a sure sign that ransomware is an enduring threat is more established threat actors, like Conti and REvil, have morphed into new affiliates like Black Basta with similar techniques, tactics, and procedures (TTPs).

A Look at the Current Ransomware Ecosystem

The ransomware criminal market is a thriving ecosystem with many types of threat actors fueling attacks. Despite law enforcement and governments efforts to crack down on cybercriminal activity, there are several groups that have significantly disrupted their victims’ organizations throughout 2022.

Most recently, Hive has made headlines as a significant threat to network defenders. According to Cybersecurity and Infrastructure Security Agency (CISA) Alert (AA22-321A), Hive ransomware actors have victimized more than 1,300 companies raking in approximately $100 million U.S. dollars from June 2021 to November 2022. Hive ransomware follows the RaaS model in which developers create, maintain, and update the malware while affiliates conduct the attacks. The initial intrusion method depends on which affiliate conducts an attack, but observed tactics include things like bypassing multifactor authentication, using single factor logins via Remote Desktop Protocol (RDP) and virtual private networks (VPNs), distribution of phishing emails with malicious attachments and exploiting the following vulnerabilities against Microsoft Exchange Servers:

So why is Hive currently deemed a high-risk ransomware threat? Why does it warrant a CISA alert? A few things to consider. Extortion – Hive actors run a Tor site called ‘HiveLeaks’ that stores exfiltrated data from victims that do not pay the bitcoin ransom demand. And Hive actors have also been known to redeploy ransomware, both Hive and other variants, in the networks of victims that restored operations without making a ransom payment.

Distributed Denial of Service (DDoS) attacks are another common tactic amongst ransomware groups in 2022. ALPHV (BlackCat) and Black Basta have both been observed launching DDoS attacks to pressure victims to issue a quick ransom payment to get their sites up and running again. Not only is Black Basta a powerful ransomware gang, but in early November, Sentinel Labs security researchers revealed evidence that it very likely has ties to FIN7 (aka Carbanak). You can expect a double extortion campaign if you are unlucky enough to have an encounter with these groups or those like them.

In terms of targeted locations, recent research shows that North America and Western Europe are the most targeted geographic areas for ransomware attacks in Q3 as seen below.

Further to that, manufacturing and technology have reigned supreme for industries incurring the most ransomware attacks in Q3 with healthcare coming in as a distant third, but no industry is completely safe.

Can Ransomware be Stopped?

Sometimes it may seem like too little too late, but governments and international governing partnerships alike are making great strides to find actionable solutions to the threats that ransomware presents. In the U.S., CISA manages a #StopRansomware initiative as a centralized source of truth that guides users on all things ransomware including how to report an attack to the U.S. government, alerts, readiness resources, and more. But cooperation to shut down ransomware operators and attacks extends far beyond the U.S. borders.

Ransomware is a global threat that requires an all-hands-on-deck approach across continents to join forces against cybercriminals. The U.S. recently hosted the second International Counter Ransomware Initiative (CRI) Summit bringing together 36 countries and the European Union. During the multilateral summit, CRI partners met with private sector partners to discuss and develop concrete, cooperative actions to counter the spread and impact of ransomware around the world. The CRI is comprised of five working groups that focus on the following counter-ransomware initiatives:

In 2023, CRI partners will build upon these frameworks to develop new actions outlined during the Summit.

Looking through another international counter-ransomware lens, INTERPOL’s first-ever Global Crime Trend report compiled data from 195 member countries to analyze the perceived threat level of ransomware across regions. Ransomware was unanimously identified across all regions as a major cybercrime trend posing a ‘high’ or ‘very high’ threat. More precisely, 66% of respondents ranked ransomware a ‘high’ or ‘very high’ cybercrime threat and second only to money laundering with a 67% ranking. Additionally, 72% of respondents ranked ransomware as the cybercrime threat most likely to increase in the future.

Ransomware is a cat and mouse game, but with increased international attention from groups like INTERPOL and CRI, for example, the pace of ransomware attacks may finally begin to decelerate.

Ransomware Can Happen to Anyone

While some industries don’t fall victim to ransomware attacks nearly as frequently as others, it is fair to say that ransomware has become a prolific threat across sectors. The threat of a ransomware attack can strike any organization at any time, and 2022 is living proof of that. A look at organizations that suffered massive data breaches in 2022 shows that targeting is indiscriminate and can impact any type of organization.

These are just a few examples of countless attacks driven by hackers that seek to profit from stealing private data and extorting organizations of any type.

The possibility of a ransomware attack has led many organizations to adopt cyber insurance; however, many are starting to fall in the ‘cyber insurance gap.’ In a recent study by Blackberry and Corvus Insurance, key findings indicated that 37% of respondents have insurance, but their policy does not cover ransomware payments. Of those with ransomware payment coverage, only 19% of surveyed businesses have limits greater than the median $600,000 ransomware demand in 2021. This leaves organizations questioning if the increasing policy premiums are worth the ROI or if it is better to set aside a self-funded account in case ransomware strikes.

Additionally, organizations that are not able to meet certain security requirements, such as endpoint detection and response (EDR), are often denied access to cyber insurance leaving no assistance with ransomware attacks. On the other hand, 41% of respondents brought EDR on board in order to meet the security benchmarks for cyber insurance.

Take Control of Your Ransomware Readiness

Unfortunately, the pace of ransomware attacks follows an upward trajectory as attack surfaces broaden across industries and attack motivations increasingly blur the lines between geopolitical issues and traditional cybercrime tactics. So, what can your organization do to better protect your assets against this dangerous threat?